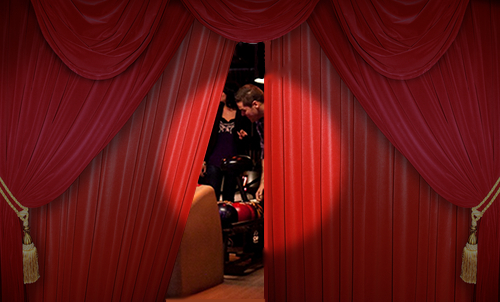 This week Match.com’s PR department reached out to set up a time to talk about an important upcoming announcement. Then today the Match blog, Up To Date, features a post, Stay Tuned for an Exciting Announcement from Match.com.

Match.com will be making a BIG announcement on Monday, May 14th that will change the way singles connect, meet, and date- online and offline! Stay tuned here on the Match.com blog to hear the exciting news before anyone else on Monday.

Companies usually show their hand a bit early, often via inadvertent slip-ups, and it appears that Match has done this. The image name for the blog post is “match-events-preview-pic1.”

More obvious, the photo shows a man and a woman in front of a bowling ball rack. Steve Jobs was the master of misdirection but unless Match has taken a page from the Apple playbook, the image is telling us that some sort of live events service is coming from Match on Monday.

Here I go out on a limb to pre-announce that Match is bringing back live events next week. Let’s break it down, shall we?

Like many “new” things happening in online dating, what’s old is new again. Match ran Match Live for several years, shuttering the service around 2004. I went to a number of Match Live events ranging from dinners to wine tastings to Celtics games. It was a great way to meet 25 or so Match members all at once in the flesh, without resorting to speed dating. These were fun yet ultimately useless events. You couldn’t filter the people who showed up, and I was often stuck at a dinner table with people I had nothing in common with, but that was part of the allure of the experiment. Who shows up at these events and would I like them? Turns out I liked the sporting events better than the company, but it was a good and worthwhile experiment.

I think the official explanation of the demise of Match Live was that events were too much work and didn’t bring enough value to members. Someone correct me if this is wrong. Events were basically a drain on Match. Some portion of attendees were already paying members, so Match was spending money while actually reducing customer lifetime value. But then again there was a $25 fee, so there is some revenue but damn that is an expensive way to make money, especially with the event coordinators in each city. I wonder if they saw live events as a way to convert free members to paying members?

Could live events have anything to do with Speed Dating? Thats great for some people. Some people being a fraction of a percent of the overall dating population. Few experiences register on the awkward scale higher than speed dating. I have two absolutely hilarious speed dating stories that I’ll share on here someday. Not a bad business for a few companies though.

If Match is bringing back events, what form will they be in? Lets see what we know so far. First fact, Match cloned HowAboutWe. This was incredibly poor form on Match’s part and I will never forgive them for screwing over HAW. Match spent millions on the dog we call SinglesNet (another rare screw-up on Match’s part), and they didn’t have the decency to at least flow some cash to HAW for doing all the innovation and hard work for them. That said, tons of sites have cloned HAW by now, but still, Match, grrrrr. Read Match Flatters HowAboutWe By Copying Them. Again. for details.

Rant over, now lets get creative and throw in the idea of group dating on top of curated dates. There are only two people in the announcement photo, which dampens the prospect of group dating, but you never know.

Traditional or group date, the question becomes how will Match approach group events to avoid the problems they had with them almost a decade ago?

One scenario that we end up with is a Match live events service where people pick their date ideas on Date Spark, and Match organizes the date on their behalf. No organizers to manage, it all happens on Match.com, so it scales.

Or what about self-organizing group dates? I propose an event, and invite lots of people from Match to the event, in effect making me an event planner and matchmaker. I like this idea much more than paying some woman in Texas $500 to basically match me with other Match members #valuepropositionfail.

Meetcha did self-organizing group dates, that was a tremendously great idea, but alas, Meetcha, which was sold last year to Lavalife, doesn’t even exist anymore .

Perhaps Match is out to monetize the entire event timeline. pulling revenue from subscriptions as well as from event venues. That seems like a stretch, unless they have a third party who takes care of the details behind offering Date Deals with thousands of merchants. There’s money there, but its like fracking, a difficult and potentially poisonous process if they screw it up.

Or is Match simply going to use the PR machine to promote Date Spark itself? am I over-thinking things too much here? That is a distinct possibility.

What about Crowded Room? Is that the mobile part of live events in Match’s Big New Thing? Does anyone reading this know what Crowded Room is, or even care?

Long odds are that the new service is some sort of video dating, another Match feature from a decade ago that they shut down. They should have kept video introductions going, another rare poor decision on Match’s part.

But the bowling balls, that alludes to live events, not digital. “change the way singles connect, meet, and date- online and offline.” that makes me think of matchmakers or friends matching friends. How does a live event change how we meet online? That doesn’t make any sense, yet.

Currently, Matchlive.com redirects to Match.com. Keep an eye on it.

Thats enough prognostication for one day. What do you think Match is going to announce on Monday?