Calling All Players: Match.com Wants You 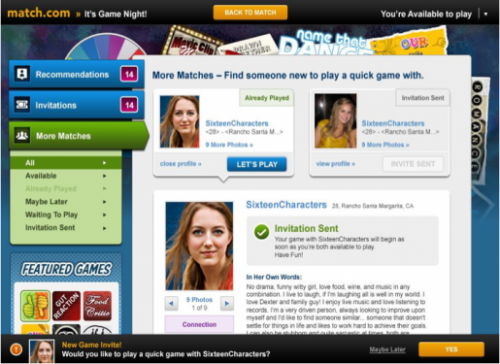 Match.com is launching a game service for singles.

To play you are required to hack into a government mainframe with a secret password, and the game unfolds like this:

Casual gaming is a an enormously competitive multi-billion dollar industry, and thats just on Facebook. Everyone has at least tried Farmville, right? Over the years I’ve heard from lots of gaming executives who were going to crack the singles market. And from dating executives saying they were going to crack the gaming market. Heck, the guy who invented the entire PDA market runs a casual gaming/dating site for seniors at one point.

Before friends were matching friends, games were going make dating fun, because online dating needs to be fun, right? Whatever, I just want them to be more effective and not take a lot of my time, but I seem to be alone in this regard.

In recent years a number of companies have attempted to bring casual games into the online dating sites. And then there’s avatar-based chat for dating sites, which went nowhere fast, so moving on…

One would think that casual gaming would be a boon for dating sites. On some sites I’m sure it is, although I don’t follow that part of the market very closely. Games increase interactivity between members, give advertisers more places to sell their stuff, increase engagement numbers and give people a way to spend time together before they meet in person. Win win all around, right? Wrong, at least so far. Show me one top-10 dating sites that has games. Anyone?

Now we have Match moving into games, and from what I can tell, they are jumping all-in. They hope that games will enable you to know more more about someone in five minutes of gaming than two weeks of emails, which leads to more content users, which tell their friends, who pay for Match subscriptions, and so on. For Match’s sake I hope they are right, because this whole friends matching friends think isn’t working out so far.

Cities will have designated game nights, where people log into Match at a specific day and time to play against other singles in their area. This is necessary of course, yet brings up the whole issue of “I had a crap day at work, rent is due and now I have to log in and play casual games on Match.com” conundrum. In our DVR nation, it remains to be seen how actively people will seek out game night on Match.com.

I’ve been going to game night at a friend’s apartment for years. If the online version of these games is anything like our game nights, people will be buzzed and coming up with wildly inappropriate answers for Scattergories, at least thats how we roll.

Match games are not about levels and competition. They are a fun new way to meet new people. They are not about flirting for entertainment. They are about helping members get to know each other better (tastes, personality, preferences). No monkeybusiness, no funny stuff, just good clean fun, or so Match hopes.

Match will be rolling out seven fun and easy-to-play games that allow members to figure out whether they have chemistry with each other before going out on a date. Each game lasts one to five minutes each and are structured to create shared experiences and encourage interaction between players through instant messaging.

The tag line for the games is “Forget the email, now you can play a game!” I wonder how many people will prefer to IM during games instead of emailing each other? Could IM cannibalize other forms of messaging and interaction on Match? I forgot to ask if I can play the games on mobile phones. Playing games on the bus/commute, waiting in line at the bank, etc, could be a big usage driver.

Match can design the entire user experience down to the tiniest details, but who knows what will happen when hundreds of thousands of singles start playing games together online. Imagine all those women on Match: You winked at me? Loser, to get my attention you need to beat me at Gut Reaction and chat me up for a while before I even think of emailing you. I think the law of unintended consequences is going to play a potentially fascinating role in Match Games. That’s going to be a lot of fun to watch.

New Match timeline: A friend takes you to a The Stir Match singles event. You like the event, so you become a free member. Then you realize that you can’t play games without being a paid member, upsell ka-ching. You browse profiles and wink at a few people. Nothing happens. You invite them to game night, and bam, you’re goofing off playing Name That Dance and flirting like a pro. Then it gets complicated. Do you let them win, like letting your boss win at golf, or do you crush them with your encyclopedic knowledge of obscure 80’s break-dancing moves? Will that turn them on, or off? Or should you, shudder, just be yourself? Because you know how well thats worked out for you in the past. What matters is that more and more people will join Match, deepening the dating pool, and some of them will pony up for a 6-month subscription. Who joins a dating site for a month anymore?

I was glad to hear that Match has put a lot of effort into making a more natural end to each game. At the end of a game session, the system will find out if you both want to a) play another game or b) keep chatting vi IM, trying to reduce the harshness of the dreaded c) next! Thats how I feel every time I try speeddate.com. At the end of the date, I think we really hit it off, and she bails on me. #lowselfesteem.

As with Match’s The Stir,they will leverage the years of work put into their current matching system to bring together members who *should* be a good match. We’ll see. Match says they will make it difficult for 60 year old men to invite a gaggle of 20-something hotties into games with reckless abandon.

Dear pickup artists selling weak e-books, your next book should be “How To Score @ Match Events and Games.” You’re welcome.

Talking with Match yesterday, I got pretty jazzed hearing about how they might take game results and feed that back into profiles. So many dating sites do so little with the incredibly-detailed treasure trove of information they gather about members’ behavior on dating sites.  He’s 5’11, likes pasta, long hikes and kicking your ass at “Name That Dance.” Priceless. I kid, actually there are lots of opportunities for Match to leverage the game experience on profiles.

The good news is that Match has the long-ball view of their Events and Games efforts. No way no how are they going to get this 100% right out of the gate. These new services are going to take a lot of tweaking and refinement, and it sounds like they are up for it, which is great to hear.

Later this year, Match.com plans to integrate video into these games, further enhancing the experience by allowing members to play each other face-to-face. How many millions of times have I asked dating sites to use video? Go team!

Yes, you read that right, Match is seriously looking into integration various types of video back into the site. Of course, the devil is in the implementation, and monitoring and value of the videochat.

As for the games themselves, Drawn Together looks kind of cool (then again I go gaga for Cranium). The only parallel I can think of right now is Draw Something, which Zynga bought last month for $180 million. TechCrunch has a decent overview of why these collaborative games work.

Look at that up up up and then….CRATER! Not that this has much bearing on Match games, but it is a similar service. Speaking of hype, don’t get me started on Pinterest. Although Match should make a Pinterest clone and hitch it to people’s profiles. That could be pretty cool.

Thinking about drawing games, one wonders if Match can get people to “level-up” for additional fee. Or unlocking new games, or more emotive emoticons, etc. Casual gaming companies have figured this all out already, all Match has to do is, you guessed it, copy them.

Food Critic feels like Yelp!, the game. That could be big fun. Almost every date I’ve ever been on has featured a food component or discussion topic.

Best and Worst stories = BadOnlineDates, brought to you by Match.

If I Could is probably the most though-provoking game of the bunch. I haven’t played any of them, but the type of information Match could gather from this type of game could slot right into people’s profiles and the matching system.

Match knows all to well that Events and Games are works in progress. Mandy, who’s been at Match for six years, knows that past attempts at events like Match Live didn’t scale, and she is excited and determined about the possibilities of each. So am I.

Match’s blog post about Games: Beyond the Wink: Games on Match.com.

Any guesses at what percentage of Match members will be playing games every month after a year? Leave a comment with your answer.