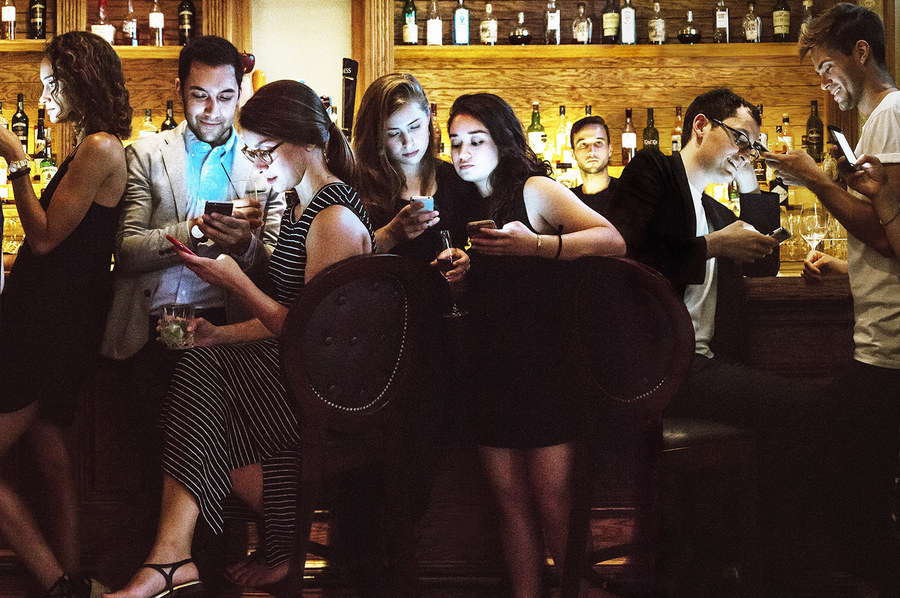 Longtime dating expert Julie Spira wrote a piece on HuffPo about a Vanity Fair article,  Tinder and the Dawn of “Dating Apocalypse.”.

Update: Tinder just lost its mind on Twitter over a Vanity Fair story. Grab the popcorn, this is going to be good.

I couldn’t even bring myself to finish the VF article. Story after story about relationship-challenged New Yorkers. Men in New York treat women terribly and brag about it in Vanity Fair. Wow, you don’t say?

The VF article is a retread of a topic that’s been beaten to death by the media and dating bloggers for almost two years, but VF decided to hang out with a bunch of New Yorkers who rack up Tinder sex-mates like there’s no tomorrow and talk to them like they are adults or something. The writer clearly emerged from a cave last week and the first thing they did was go on a Tinder date and now she’s scarred for life.

Surprised the cover photo wasn’t an Annie Liebowitz-styled image of a 24-year old guy in a $2,500 suit crawling down a fire escape at 4am while looking at Tinder, on his way to conquer one more target before dragging himself back to his $6,000 a month apartment he shares with a bunch of neckbeards learning how to code while working at Venture-funded almost-hot StartupX.

“It’s an eye-opener and validation of a woman’s worst fear. The guys are swiping right to hook up and it’s all just a game.” Give me a break. The women who enable men to behave this way are just as complicit in the degradation of modern courtship as Tinder is. And Tinder is at the bottom of the pile, along with Ashley Madison.

In New York legs are spreading like there’s no tomorrow and in Japan people are so timid they have to date pillows and robots and fake women on texting services. Don’t get me started on the dolls. Can someone go to Japan and help those poor people out?

What the hell did online dating do to us?

62% of Tinder users are actually in a relationship. Let that sink in for a moment. Remember what happened with Ashley Madison last month? Just wait until Tinder is hacked. By that time we’ll be so callous towards each other that everyone will just laugh. “Honey, you know, it was just me and the guys having fun at the bar.”

Can we talk about the 26 million matches made every day on Tinder? Why doesn’t anyone compare Tinder’s performance to other dating sites? More is better? Is that it. That’s all we’ve got to talk about? How many of those swipes are artificially inflated by spammers and bots? Nobody talks about that.

What is the equivalent of a right-swipe on a dating service? Replied to emails? If I email you and you email me back, that’s a match. Sam Yagan at Match told me that years ago. Back when he was the Co-founder of OkCupid, and they always said Match wasn’t worth the money and nobody should have to pay for a dating site. Money talks, right? $90 million for Sam and his team and now he’s at the helm of the company that’s changing society in ways they can’t stop, or even fathom because they’re right in the middle of it. Scary.

Maybe Mandy Ginsberg got out of Match at the right time. She’s now the CEO of The Princeton Review and on the board of JC Penny. I wonder what she thinks of Tinder.

Tinder’s definition of a match as two people physically moving their fingers about a quarter of an inch to the right compared with writing and responding to emails. Comparing swipes to responded-to emails is ridiculous; they’re not even comparable. But we’re talking about Tinder here, so anything goes.

How about this. Whenever two people like or favorite each other’s photos on a dating service, they are a match. Is that comparable to Tinder mutual swipes? I don’t know and I really don’t care anymore. And neither does anyone else, because all I read about in the media are stories about people on Tinder hooking up three times a week and 25 million matches a day.

What’s that other site, Hinge? Raised millions of dollars and copied much of Tinder and now it’s one of the most used services? Slow clap. They’ll sell to Match as well. You do understand that acquisitions like POF are arranged years in advance, right? It’s not like Sam Yagan and company woke up a few months ago with the brand-new burning desire to acquire POF.

I think domestically, there’s nothing that we need to own, meaning we’ve got sort of everything checked off.

Yeah, right. Go Markus@POF. He’s the smartest guy in the industry. $575M for a company where what, 20% of it’s users leave every month! Markus destroyed Zoosk and a ton of competitors, warts and all, and gets a half-billion for the effort. Much applause for a job well done! Talk about taking the long view of the industry.

Online dating is barely recognizable from when I started covering it in 2002. Yes of course there are well-run sites captained by fantastic people, but those companies are extremely rare. How unfortunate.

Julie Spira says that women are meeting men on Tinder to change them. Now I’ve heard everything. Almost a year ago I wrote, Can Dating Sites Make Us More Civil? The answer is obviously a resounding no. Online dating has turned a large portion of the dating population into a bunch of maladjusted sexaholics (for the most part, if you read anything in the media about online dating these days). If you want to change the way men relate to women, Tinder is not the right medium to make that happen.

Really, it’s best not to think about it too much, we might get a conscious and realize how screwed up dating is now and that it’s mostly the fault of the dating industry for being asleep at the wheel while the money rolled in.

The Match Empire grew so large and boring! Sure it prints money, but for a category-leading brand, it’s become a real snooze. Can’t go wrong buying a Toyota, right? Makes me pine for the days when OkCupid was all the rage. To this day, Adult Friend finder is the most feature-rich dating or hookup app on the planet. Even OkCupid has changed very little in five years, just like Match. See a trend here? You think there are going to be any big changes at POF? Nope.

Remember when the industry cared about matching algorithms? Not any more. Well eHarmony has to, it’s in their branding and their DNA. Everyone else has “data scientists”, which is short for, “I have no idea what I’m doing but I landed this prime gig at dating site X.”

I’ve always felt like a bit of an edgy ombudsman regarding the online dating industry. Terrible way to make a living though. Having a conscience and all, difficult to get ahead. But I’ve had a lot of fun over the years and met some amazing people who toil behind the scenes who actually care about their customers. May they keep rocking on.

How quaint that Tinder and marketers have rebranded spammers and scammers as “brands”. Now that is something that Tinder got right.

In finality, Tinder is the worst thing to ever happen to the online dating industry. End of story.