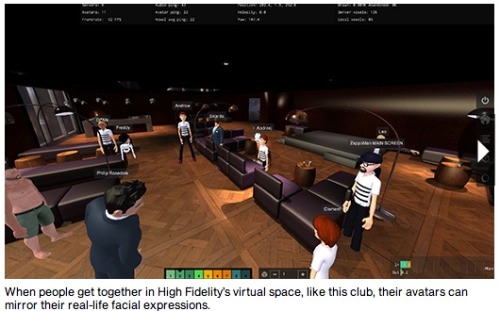 In the early 1990’s I was part of the Boston Computer Society Virtual Reality Group. We built clunky virtual worlds viewable in scary head-mounted monitors and at any time someone in the group had very expensive high-performance computers on loan from various vendors. Things died out over the next few years, the computing power just wasn’t there to make the worlds look realistic.

Fast forward to 2003 when Linden Lab launched SecondLife. More computing power and no head-mounted display required, but the navigation and tools were too geeky for most people. After that wave of hype, SecondLife sputtered along into obscurity.

Now, the creator of SecondLife, Philip Rosedale, is at it again. His new company, High Fidelity, is developing a set of tools to create even more stunning virtual environments.

In an article for the MIT Technology Review, Rosedale talks about High Fidelity, and of course gives a demo. The demo is a nightclub.  This got me thinking about the handful of virtual environments that have launched in recent years targeting online daters looking for a more immersive dating experience. Unlike traditional dating sites, users can experience an online date, including flirting, gifting, a selection of different environments and other offerings.

The only problem is that these companies never went anywhere.

Some of what his company is creating is much the same as Second Life. You download some software and then enter a virtual space where you can steer your avatar around and build stuff. This time, though, building is much easier, the lag mostly eliminated, and the graphics more impressive. As in Second Life, a digital currency (convertible into real currencies) can be used to buy things such as virtual outfits. You can earn it by offering up your spare computer processing power to other people in High Fidelity’s metaverse—a system Rosedale hopes will make it easier to corral the computing power needed to run complex simulations.

At first glance, it appears that High Fidelity could be a great platform for an online virtual environment for dating. Easier tools, Oculus Rift headsets and computing performance improvements mean millions of singles could log in at any time and look for a date. Or perhaps they meet on a traditional dating site, and then have their first date in 3D. I don’t expect the dating industry to dive into 3D dating anytime soon, but it’s a safe bet that some intrepid entrepreneur is going to give 3D dating a shot again.