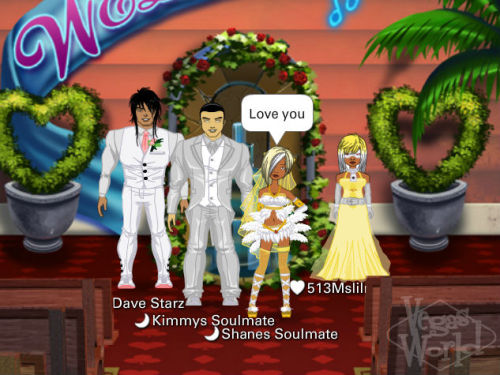 Did you know that recent research shows that 50 percent of spouses who met online did so somewhere other than a traditional dating site?

True love knows no bounds, and more and more people are finding it in multiplayer games and virtual worlds. One such couple, newlyweds Kim and Shane Mitchell, found each other in the social casino Vegas World. After initially bonding as single parents, Kim and Shane used the virtual world setting to ease into a friendship, which later turned into a real life love affair. Falling in love online, they celebrated their virtual wedding in the game before ever meeting in person. They used gaming to get to know each other’s children as well, spending time playing together on Xbox Live. The happy couple from Tennessee is now nearing their first real-world wedding anniversary.

Vegas World is just one of the unconventional places where singles of all ages are finding romance. It has enabled more than 30,000 virtual weddings in its chapel, and 85 percent of its users are in virtual monogamous relationships within the game.

That is a LOT of virtual weddings. Hey I know a guy who met his wife on SecondLife, anything is possible these days. I wonder what other non-dating sites and apps people are using to romantically connect?