I’ve always loved the design and marketing of HowAboutWe, although in terms of profiles, search and being effective, it’s always fell a bit short for me compared to the top dating sites in terms of payoff for time spent on the site. While their unique offering has been copied by Match and other sites, I’ve not felt a strong sense that matching based on date ideas was really going to go mainstream. And that’s ok, in this world of a million different niche sites we live in.

HowAboutWe draws 100,000 new members each month, and the company raised $4.2 million a few weeks ago, bringing it’s total capital raised to $22 million. Now sure how many of those members convert to paid subscribers or their churn rate, so there’s that. But the brand awareness is there for sure.

People on HAW are actually going out on dates via their profiles on Match and OkCupid. This is a personal observation and in no way indicative of everyone else, but it’s what I hear from everyone I talk to. I wish we could get a sense of how their partnerships are doing, especially the AARP one. Do older people really go for “Let’s put on our best white sneakers and go have an early dinner”?

$22 million is a lot of money for a dating site. Either things are going very well and this is useful accelerator capital or things are going in the other direction and they needed the infusion of capital to keep going.

At first I was excited to check out the SpeedDate app, but it turns out it’s a never-ending display of profiles photos where you answer Yes/No if you like a person. That’s not Speed Dating, that’s a snooze of a feature that Match has had for a few years. Why they chose to mislead users with a confusingly-labeled and frankly antique feature is anyone’s guess.

I fared a bit better with the new DateMap. As one would expect, it’s a map where you click on a person to see their location and full profile.

The problem is that HowAboutWe is so major-metro-focused, in Boston the area there are so many people in the sidebar that you end up scrolling and looking for sexy people instead of based on interests. The HAW search engine has improved a bit over the years, but it’s still matching on generic attributes. Matching based on looks seems to be something we’re stuck with, even eHarmony is more looks-centric these days.

I’ll spend some more time on HAW but out here in Vermont there is absolutely zero action on the site. Maybe I’ll be a 60-year old man in Boston and see how that goes. 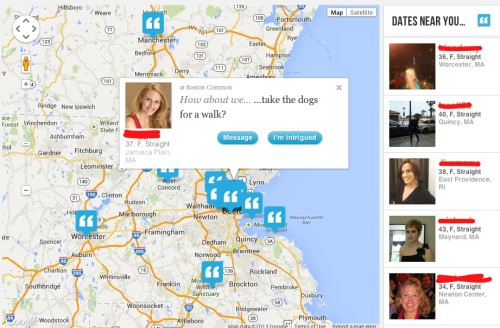