Facebook Officially Jumps Into The Dating Pool With Graph Search

Facebook had an invite-only press event today and boy did they deliver. Facebook announced a feature so stunning and ridiculous and crazy and amazing that it could quite possibly render wide swaths of various industry to waste. One things is for sure, the dating industry is sure to feel the effects of Facebook’s latest developments, to what extent it’s too early to tell.

Snip from FB: Facebook’s mission is to make the world more open and connected. The main way we do this is by giving people the tools to map out their relationships with the people and things they care about. We call this map the graph. It’s big and constantly expanding with new people, content and connections. There are already more than a billion people, more than 240 billion photos and more than a trillion connections.

You’ve heard me reference the social graph countless times. It’s your friends, tastes, preferences, Likes, etc. Many dating sites have attempted to import these items into your profile. In fact, each Match.com profile has been an object in the Facebook social graph for a while. But so far, all dating sites have been able to do is speed up the signup process by on-boarding your Facebook data into your new dating profile. I’m still patiently waiting to see someone  something/anything cool with creating algorithms to deliver next-generation matching based on your social graph.

So, Facebook announced Graph Search. It’s part of their efforts to beef up search on the site, which has been lackluster but now has the company’s full attention. Graph Search is important enough that they are removing the word Facebook at the top of every page.

What was so interesting to me was how certain bloggers have latched on to how the new Facebook search could be used to find a date. This Atlantic article says it all. Facebook’s Graph Could Be OkCupid, Yelp, and LinkedIn, All in One.

We are not indexing the web. We are indexing our map of the graph, which is really big and constantly changing. Almost a million new people every day. 240 billion photos. 1 billion people. 1 trillion connections. 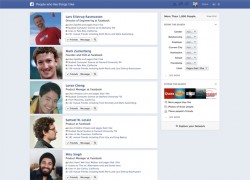 Facebook is tying their search functionality into our social graphs. Graph Search will use a series of filters that look a bit like an advanced tagging system, allowing it to sort things like relationships, interests, and location (source).  Anyone who has used the self-serve advertising feature on facebook will be immediately comfortable with the new Facebook search. If this plays out like I think it will, Facebook will open up the API and social dating sites will do all sorts of cool things with the search interface and the results.

Graph Search is not web search. It’s designed to show you the answer and not links to answers. Results are ranked by people you care the most about; the rest are sorted by mutual friends and other signals in the Facebook system. Results are ordered by how close you are to these individuals, but it’s also about “exploring new connections.” Of particular interest to the dating industry are the “other signals”. Imagine if a third-party could extent Graph Search with their own in-house matching algorithm? Just wow.

Match has their complex Synapse matching systems, other large sites have their own versions. But one must ask the question: Why rely on dating site search when Facebook is going to pour hundreds of millions of dollars into R&D to continuously improve Graph Search?

Stocky then tried a dating query — “single women who live near me.” A group of young women appeared onscreen, with snippets of personal information and a way to friend or message them. “You can then add whatever you want, let’s say those who like a certain type of music,” Stocky said. The set of results were even age-appropriate for the person posing the query. “We’re trying to facilitate good things,” Stocky said.

Instead of relying on a dating site, you can search for singles yourself, right from the Facebook search bar. Instead of relying on 25+ different social dating sites, you can find your match right on Facebook. I’ve been waiting for this for years now, what an absolutely incredible turn of events. The funny thing is that I was talking to people about RDF and semantic web-based search 10 years ago. It’s finally here, brought to you by Facebook.

The question now becomes what is this going to mean for social dating sites? If Facebook opens up the API for Graph Search, social sites could leverage it within their own communities. Or will people bail on social dating sites, skipping the false-positives, spammers and small or unfocused communities and dive directly into the billion people on Facebook? This is going to be interesting!

From The Verge liveblog.

I’m busy getting ready for my Online Dating Summit keynote. I’ll have a lot more to say about Graph Search as more and more of the functionality is publicly released and we’ve all had a chance to play around with it.

Oh, and Facebook could seriously challenge Yelp with graph search. And Monster and LinkedIn too (source WIRED).