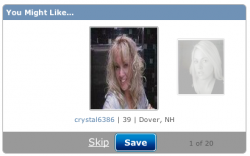 Match has implemented a HotorNot-style browsing feature on member homepages called You Might Like. It’s a simple feature, the two options are Skip and Save. Skip I get, but why Save? People’s Saved Favorites list is where great matches go to die. Why not provide the ability to message someone immediately? If Match is going to throw photos in front of members like every other dating site, why stop there? Why can’t I Like the photo right in the feature? Photo Likes are the new winks. Can you imagine if You Might Like becomes popular? After years of interface tweaking, UI design trials, millions of dollars spent on developing new features, Match’s primary engagement tool is a photo stream. Wow. The effect Badoo has had on the dating industry when it comes to monetization and features is absolutely staggering.

I’ve never seen any of the people that showed up in my You Might Like feed, which is good (or is it?) There must be some value or the feature wouldn’t be right smack at the top of the member home page. I wonder what algorithm is providing the feed of photos?  You Might Like will hopefully drive more engagement and messaging between members, DailyMatch certainly did.

Daily Match is what Match calls their newsfeed which surfaces a number of actions performed by members. Really, can the user photo thumbnail get any smaller? Call it a pinkynail, ridiculous. Actions I’ve seen so far are viewed profile, emailed me, updated profile and/or photos and strangely, added photo caption. Most of my feed is full of notifications that people added a photo caption. That’s pretty useless information to me. I prefer the OkCupid wall, which is far more detail-rich and I bet drives more meaningful interaction. I also wish Match would aggregate actions by user, seeing the same person listed 10 times in a row for updating their photo captions is a waste of screen real-estate. Batch it up into a single multi-action update once a day, please.

I can’t find Match Games anywhere, where did it go?