While browsing AngelList, I came across Pinstant Karma which calls itself “A pitch-perfect convergence of match.com and Pinterest that will energize the online dating segment.”

With stunning visual pin boards singles can easily ‘like’ and comment on eachother’s interests. No more essays, quizzes, or pseudoscience, just easy conversations about common interests all within a familiar Web 2.0, social networking format.

A number of new dating sites are taking the social discovery route. My problem with most of them is that by removing matching algorithms, they are making finding a date harder, not easier. Matching on interests is well, interesting, but thats not what makes for a great date. What about personalty? Just because he likes Star Wars, Xbox and is a Republican doesn’t mean he’s a good date.

Visual Interest Matching sounds great, but is that what people really want to do? This is exactly the kind of thing that Match could replicate easily. They’ve already done this to some extent in the profile builder, which (last time I checked) displays photos that represents things like different activities and you click on the relevant images as part of the profile creation/update process.

These sites seem to think that people have all the time in the world to browse profiles. I don’t know anyone who does, but thats just me. I threw up a profile, see if you can find me. Press release. 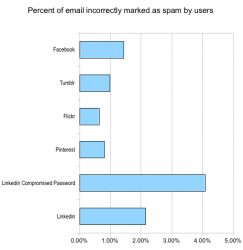 In The Social Network That Cried “Wolf!”, Cloudmark reports on the percentage of email incorrectly marked as spam by users. I wrote them and asked if they could do the same type of post about the dating industry.

Last week I wrote  Flikdate Launching Mobile Video Speed-dating and have had some interesting back-and-forth convo’s with one of the founders. Today we see Facebook Tests Adding Video “Call” Button To Profiles. Video calling on profiles has been available for a while now, but this looks like you can call people you don’t know (can you call someone you subscribe to?)

Remember what I said last week about dating sites using Facebook as an authentication tool? Clique is now doing this. To boot…

After finding that their invitation-only model had limitations, Clique has just recently announced that they are allowing the general public to join the site. Getting the site off the ground in a market dominated by well-known dating sites like Match and OkCupid hasn’t been without challenges.

The site always felt too elitist to me and it turns out it was. Via Dowser.

When someone friends you on Facebook, that request doesn’t always get through to your inbox. Facebook employs a complex algorithm to decide the likelihood that you know somebody, and whether or not to push through a friend request or place temporary limits on the sender’s friending abilities if they are being abusive. In real life, this would be like the government stopping random people from approaching you in a public place and saying hello. If these people message you, their messages will go to your Other Messages folder, a place most people don’t explore. “With a high degree of certainty, we know who you would be friends with”

I am very interested to see how friending algorithm suggestions affect dating sites built on top of Facebook. Read Inside Facebook security: defending users from spammers, hackers, and ‘likejackers’ for more.

MIT Technology review goes deep into What Facebook Knows about you. This is only mildly terrifying.

A study presented at the annual meeting of the British Psychological Society in London found that people with strong romantic beliefs who idealize their romantic partners are most likely to fall victim to online dating scams. Meanwhile, the U.S. Department of State has posted an advisory warning Americans to “be alert to attempts at fraud by persons claiming to live outside of the U.S., professing friendship, romantic interest, and /or marriage intentions over the Internet.”

Old news but IAC, which owns Match, made some more money.

Management expects 2Q margins to be roughly flat yoy (at 36%), given that shift in spending.

Meetic lost over 100k subscribers over the course of 2011.

Match they are ahead of their internal plan to improve three metrics:

(1) Conversion – percentage of members who subscribe
(2) Resubscriptions – percentage of former subscribers who come back and subscribe again
(3) Marketing efficiency – the cost of acquiring a member.

Thanks to Maria S. Seredina at The Goldman Sachs Group for the intel.