Sex offenders in Louisiana must list their status on Facebook, other social media. What’s next, limiting what they can Like on Facebook? Where will the scarlet letters be featured on their profile? What’s the logic here? IF user IS sex maniac IN Louisiana THEN display sex maniac badge ELSE do nothing.

Is online dating a different experience for men than it is for women? To find out, Jon Millward conducted a 4-month experiment in the US and UK using 10 dummy dating profiles. Read what happened during this four month Online Dating Experiment. This is the best fake-profile test I’ve ever seen. Admittedly un-scientific, its got enough meat on its bones to re-state the obvious: Women rule on online dating sites and men are just along for the ride. Cater to women first and foremost by solving the inbox overload problem, and give guys ways to stand out from the crowd (this guy’s test profiles are brilliant).

POF Profile Question: Looking around on POF I came across this complex question. this is almost as difficult as the OkCupid question about turning gloves inside out. I have no idea what kind of fish I am.

Taking a page out of the Are You Interested and Badoo playbook, Facebook is market-testing a new feature which lets you pay to Highlight your facebook status updates to More friends.

Pay To “Highlight” Your Facebook Status Updates To More Friends via TechCrunch.

I don’t sext often, but when I do, its with Glimpse. What a great idea, disappearing smut! I’d imagine adult sites would be all over this concept, talk about lead-generation opportunities.

Flirtatious Labs has a Facebook flirting app. Good blog, too.

LinkedIn is getting more social. Their recommendation system has always felt pretty weak, but then again I don’t use it much. LinkedIn is for sending messages that absolutely must get through, can’t remember last time I initiated a connection there. Maybe I should do that more often. 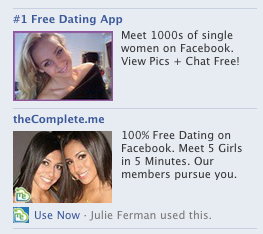 Looks like the most recent TheCompleteMe Facebook ads don’t mention their supposed 30,000 members. They must be spending a ton of money on these ads.

What’s up with five girls in five minutes? Why not say meet 25 girls while you’re making things up. Oh, and I’m 43, I don’t want to meet girls. Why can’t they take my age and target me with older women? TCM is out for a land-grab of new users. There is nothing special about this advertising or its targeting, they just want people on the site no matter what. We’ll see where that gets them.

TCM is turning into a Badoo clone more and more every day. If thats what they’re going for (big-box WalMart generic social dating), they are on the right track. Casual daters will love this approach. Forget heavy matching algorithms, just boost pageviews, earn from ads, add some fremium features (paid exposure), get it to $50 million a year and ride that pony until it collapses under its own weight. Serious daters demand more from their dating service. TheCompleteMe is not for serious daters.

What other social dating sites are people paying attention to? I’ve talked about Badoo a lot, and don’t want to just talk about TheCompleteMe and Likebright. I’m advising Likebright and we are having truly fantastic conversations about the direction they are going in and things they are experimenting with, so they are front of mind more than some other sites and I don’t want to drone on and on about them, the media will be doing that soon enough.

Yes there are lots of mobile social apps. I don’t talk about them often enough. But basically either you gay and getting laid on Grindr or Manhunt, or are straight and you have to create 10 profiles on 10 straight mobile apps while trying to find out which one has the best/most people in your area. there are no clear winners, and so many in-between apps based on check-ins, the sector is a mess and its impossible for people to get behind one app. Remember the Brightkite vs. Foursquare war? Two or three sites battling it out, big media exposure, one winner.

Mobile social dating is a commodity, throw together an app and spend your a** off on advertising. There’s no virality to lean on, and we all know how well mobile advertising works (groan.) Maybe Facebook can fix that, their mobile sponsored stories seem to be performing well. But that costs a lot more.

Frankly, its exhausting and I don’t feel like expending the time dorking around with apps I end up using for a week then deleting. I do that enough with dating sites. I think I joined 10 this week, thank god for Facebook Connect. Now if dating sites would only use it correctly so many fails out there.