I’m In Like With You founder Becomes Filthy Rich Overnight 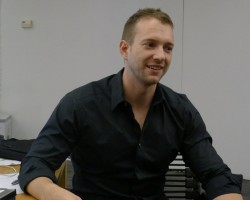 Once upon a time there was a casual auction-based dating site called I’m in Like With You. The basic premise of the site was to gain points for bidding on people by answering questions. I never really understood the site, and then it went away. But this is not a story about another failed dating site. This is about a guy who last week had $1,700 in his bank account. Today that number is north of $20 million.

“The entire company started as a joke, honestly,” Mr. Forman said. He saw the site (I’m In Like With You) as a form of entertainment, he said, and only later realized that people were spending a lot of time on it. To capitalize on that audience, he converted it into a game site and renamed it Omgpop. “It’s one for the record books,” he said of the success of the company. “It is something I did not expect.”

After Forman left Omgpop to focus on anther company, Draw Something was born. The app has been downloaded more than 35 million times since its release on Feb. 6, and players have generated more than a billion drawings. Zynga did the smart thing and snatched up Omgpop for $180 million last week, making Charles Forman one very rich and happy man.

Social discovery and mobile dating startups, there’s your inspiration to build something awesome this week. Are you pivoting into new territory or following the herd?

For some inspiration, see Pair Is A Path For The Two Of Us, Ark people search and the lastest interest-based matching based on Facebook, Yoke. Derivative evolution based on Facebook is all the rage these days. Perhaps one of these companies is going to knock it out of the park. I haven’t even gotten an invite yet but I bet Ark is going to sell for the greatest amount to a mega-corp down the road. I’m off to play Draw Something.