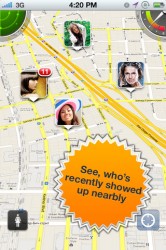 Mobile applications that track and make your current location public have proliferated in recent years. Almost all of these efforts have been tied into public Foursquare, and now Facebook, checkins. My favorite has always been Assisted Serendipity, which I’ve written about many times. There are so may other social versions of these apps, I can’t even keep track of them. Today’s dust-up in the blogosphere is over Girls Around Me.

What makes Girls Around Me special? The fact that it connects Foursquare checkins with Facebook pages and a map, instead of a text list of locations where people are. A basic step in the natural evolution of Assisted Serendipity and 50 other social apps, Girls Around Me is the one that got the data providers to pay attention.

Stalking apps, ahem, I mean mobile social discovery apps, have two primary differentiators. They either use public data from sources like Foursquare or private in-app data, which for this discussion we will generally considere as opt-in tracking. As usual, the devil is in the privacy details of Facebook and Fourquare. Set your privacy setting up right, and most? of this information is public. Do it wrong and well you can insert your own Nightmare Situation here.

You know Grindr, the popular gay hookup app? Girls Around Me makes Grindr look positively antiquated, and all it took was a few API calls to Foursquare and Facebook (Although kudo’s for Grindr to take into consideration that not that the boys on Grindr want to be that public about their trysts).

Many other similar apps have been roaming in the wilderness for years, and all it took was a few blog posts to get mobile/social networks focused on the nefarious ways their data may be used. The truth of the matter is that people are brazen idiots when it comes to checking into locations on Facebook and Foursquare. I’m one myself. I like to brag that I’m at a great concert, or out to dinner at the hot new restaurant in town with an attractive woman.

Did you know there are websites that track Foursquare check-ins so people know to rob your house? Crazy!

I shudder to think about the number of women who are going to get in trouble due to the proliferation of opt-in and automated checkins in the coming years. I think its going to be a much bigger deal than people getting attacked on first dates.

More info at Interactioned and Cult Of Mac, which says Foursquare has released a statement announcing that they have officially killed Girls Around Me’s access to their public API. Facebook is looking into it as well. Well that was fast.