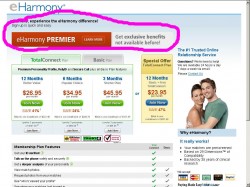 eHarmony Premier launches, looks like they are pushing for one-time payment of $503.40. eHarmony has a lot of membership options these days.

A good sign that eHarmony is doing well is its current 33 job openings.

Breaking the Online Dating Sound Barrier has written an open letter to Mr. Verba. I wonder what they will do with Jazzed? More at TechCrunch.

Match is asking affiliates to stop mentioning total number of profiles or signups per day.

We would like to ask for your immediate assistance in removing any marketing copy that refers to the number of free or paid members on Match.com or the estimated volume of users joining Match.com on a daily basis. Examples of such copy that we have seen includes, but is not limited to, “Over 15 million members” or “Over 20,000 singles join Match.com every day”. Due to a change in the Match.com advertising policy, these types of marketing claims are no longer allowed. 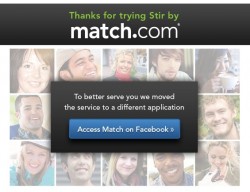 Match continues to play hot-potato with Stir. A visit to the Stir app on Facebook now shows that Match has basically embedded Match Lite into Facebook and added a Hot Or Not feature. Not a fan of photo rating as the primary feature, hurts the Match brand and not what they are about, too casual. Anything for clicks, as they say. I wonder how many people will use Match via Facebook as opposed to the website or mobile app? I use the mobile app more than anything these days.

Liquid Fare is the quintessential mobile app for bar-hopping singles. Rate local bars, lounges and clubs in terms of age, style and attractiveness of the crowd. 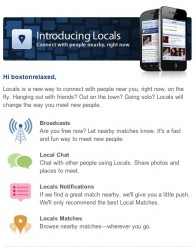