The New York Times has a fascinating article about Netflix, which is offering $1 million to anyone who can improve their Cinematch recommendation engine by 10%. It turns out that improving movie recommendations by 9% was pretty straightforward, it’s the last percent or so that’s proving to be almost impossible. Netflix knows that a 10% improvement is worth much more than a million dollars, so the competition makes good business sense.

Wouldn’t it be great if a dating site offered a similar prize? They could make a sample database available of anonymized profiles of people who have seriously dated or gotten married. Let’s ignore the fact that this is never going to happen for the sake of discussion. Anyone could download the data-set and begin developing a better matching system. Perfection is not the goal, but, like Netflix, the online dating industry could use a better matching system.

It’s kind of a chicken and egg situation though. eHarmony has by far the most effective matching system, but yet their reputation in the marketplace is far from positive. They have the basis for a good matching system, and not enough people are willing to use it to make it truly useful. I’m talking big picture here. eHarmony makes a lot of money and they marry off supposedly 236 people a day on average, but that’s nothing when it comes to the 90 million singles in the US. That’s 86,140 people per year. That’s something like one tenth of a percent success rate. That’s north of $200 million in revenue, which is great for eHarmony but not so good for singles.

Besides eHarmony’s Compatibility Matching System, Chemistry’s Personality Profile and PerfectMatch’s Dues Totaly Compatibility System, dating sites are ignoring matching algorithms. So Much for innovation. Several large sites are in fact large because they focused on large marketing spends and scamming people out of their money with sketchy communications features.

Nexflix has other ideas as well.

[Netflix] is even considering hiring cinephiles to watch all 100,000 movies in the Netflix library and write up, by hand, pages of adjectives describing each movie, a cloud of tags that would offer a subjective view of what makes films similar or dissimilar.

This is similar to the popular Pandora music recommendation system. I saw Pandora’s Founder, Tim Westergren, give a talk at MIT last year. Westergren has great stories about musicologists trying to identify music within specific genres. Rock and classical songs are identified by a standard taxonomy, but rap forced the team to create a much larger taxonomy. This video of Westergren succinctly explains the concept behind musical DNA much better than I can.

The past several years have seen the dating industry progress from generic profile search to compatibility systems of various complexity and effectiveness, back to generic profiles and now the new new thing is to bring people together in real life.

Why is this? Why are dating sites stuck in a rut, relying on marketing dollars instead of compatibility matching?

Recently a number of compatibility matching guru’s talked about a comparison shootout to find out who’s system was the best. That idea died pretty quickly. Between clashing, personalities and outrageous claims, it quickly became clear that this was never going to happen. 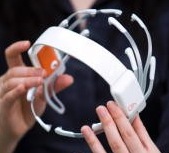 Or we can skip the whole matching system thing and wear Emotiv neuroheadsets, which are precisely the kind of feedback mechanisms we will use while browsing profiles in a decade.

Human beings are very quirky and individualistic, and wonderfully idiosyncratic, and while I love that about human beings, it makes it hard to figure out what they like.

That sums up online dating pretty well, don’t you think?